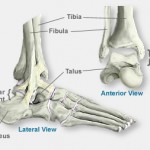 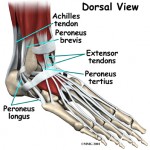 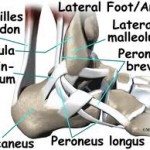 The foot is an anatomical structure found in many vertebrates. It is the terminal portion of a limb which bears weight and allows locomotion.

The ankle joint is formed where the foot and the leg meet. The ankle, or talocrural joint, is a synovial hinge joint that connects the distal ends of the tibia and fibula in the lower limb with the proximal end of the talus bone in the foot. The articulation between the tibia and the talus bears more weight than between the smaller fibula and the talus.The term ankle is used to describe structures in the region of the ankle joint proper.